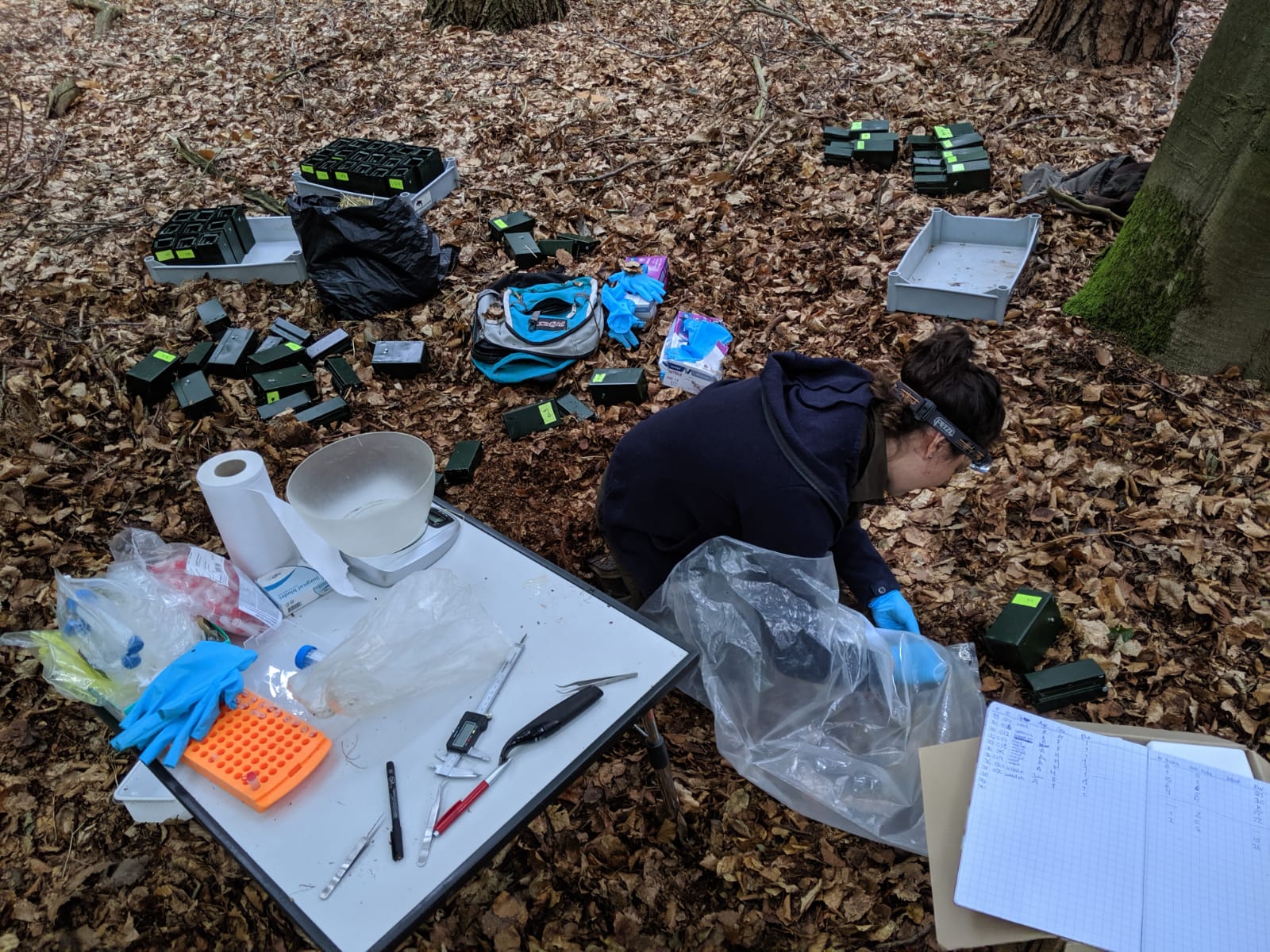 We have all heard about tick-borne diseases and their impact on human health. I’m Laura, an MSc student in Animal Sciences at Wageningen University & Research. As an MSc student, I’m lucky to be able to go on field trips and see beyond books and papers how tick-host interactions work.

The pathogens that cause Lyme disease, tick-borne encephalitis, rickettsiosis, and many other tick-borne diseases often depend on a vertebrate reservoir host for replication. One of these hosts can be a rodent, from which larval or nymphal ticks feed to develop into the next life-stage. The wood mouse (Apodemus sylvaticus)and bank vole (Myodes glareolus) are common rodent species in forest habitats in the Netherlands. Recently the yellow-necked mouse (Apodemus flavicollis) has also been reported as an expanding species in some eastern regions of the Netherlands. In our study, we want to identify differences in tick burden, exposure to tick-borne pathogens and differences in innate immunity between the three rodent species by trapping and sampling wild rodents in the field.

Trapping of the mice

Every week, we place 49 live traps per plot in the Sallandse Heuvelrug, a National Park located in the province of Overijssel. Plots are chosen in areas where the three rodent species are likely to be present. All traps contain hay as nesting material and bait to attract the rodents. The bait contains grain, carrots, and mealworms. Mice are captured one night per week and the rest of the days are used to accustom the rodents to the traps. The trigger is set every Monday night before the sampling day. Every Tuesday morning all traps are inspected to identify which ones contain a rodent.

When a rodent is trapped, the species and sex are identified by morphological and morphometric characteristics. Then, the number of ticks infesting the rodent is counted and five ticks are collected in microtubes and sent to the RIVM (National Institute for Public Health and Environment) to screen for tick-borne pathogens. In the wild, you will find around 10 larvae for every nymph. Larvae are very small and can be difficult to see if they are not filled with blood. In the rodents, larvae and nymphs are usually located in the ears, around the neck, in between the toes and below the tail. Some rodents carry no ticks while others carry up to 80. The rodents carry a lot of ticks they are usually concentrated in clusters and can cause strong skin inflammation. If a tick is infected with a pathogen it is able to transmit the microorganism to the rodent host while feeding. Ticks can also acquire a new pathogen from an infected host or from other ticks feeding on the same host (so-called co-feeding transmission).

In general, the wood mouse is the most commonly trapped rodent species in our field site, but the frequency of species trapped can vary depending on the plot and vegetation type. Sometimes we do not only capture rodents but shrews as well. Their appearance is kind of similar to a mouse, but they are actually small insectivores, more closely related to moles and hedgehogs. They have a high metabolic rate and therefore need to eat a lot. We, therefore, provide the traps with a handful of live mealworms, so that there’s plenty to eat for the shrews. Trapped shrews are immediately released upon checking the traps.  After the ticks are collected and the mice are weighted, they are anesthetized using isoflurane gas. The anesthesia period lasts around one minute before the rodent is awake again. During this time, a small blood sample is taken to obtain plasma and analyze innate immune assays in the laboratory. To avoid re-capture of the same individual, trapped rodents are marked by trimming the lumbar area before they are released.

It is October now, fieldwork is almost ending and we have trapped around 170 rodents in two months. From all rodents, 81% carried ticks, which were mostly larvae. Now, summer is over and tick season is also coming to an end. After fieldwork and data collection I will start with the immune assays in the lab using the collected blood samples. We collaborate with the RIVM, who will screen the ticks for the presence of tick-borne pathogens. These outcomes will tell us more about how the three rodent species differ in their role of supporting ticks and tick-borne pathogens. This is especially relevant as the yellow-necked mouse, a species that is involved in the transmission of tick-borne encephalitis virus, is rapidly increasing its distribution in the Netherlands.